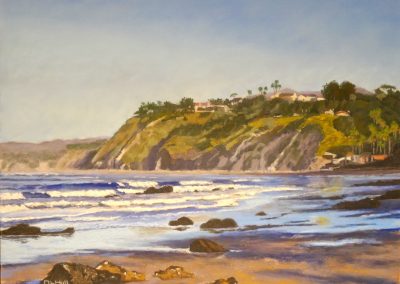 To find out more about this artist, go to www.HullArts.com

Pastel on the Mezzanine

Born and raised in Southern California, as I child I had always enjoyed art. But by middle school, I had concluded that I was totally lacking any artistic ability. In time I graduated with a degree in biology from CSU Pomona, doing a bit of scientific illustration as required by class-work, and following two years of graduate studies I began work in the SBCC Chemistry Department.

I retired from SBCC in June 2009 after 36 years in the lab, during most of which time my only foray into art was working in stained glass. Then about a year before leaving SBCC, I enrolled in a drawing class with Linda Foster and happily discovered a renewed joy in the drawing process. In 2009 I began working in watercolor and in 2011 added pastel work. Since 2009 I’ve been taking classes and workshops, benefitting especially from, and grateful for the guidance of, the following folks – Linda Foster, Cathy Quiel, Deborah Breedon, Gaye Adams, Richard McKinley and Ray Hunter.