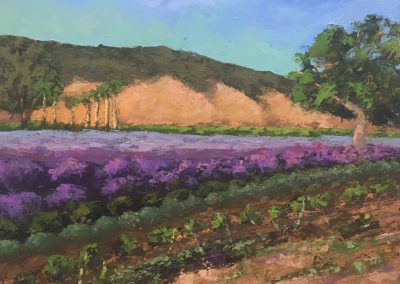 To find out more about this artist, go to www.ChristineBeirne.com

My name is Christine Apostolina Beirne and I love to paint — especially in oils.

My route as a painter is a little circular. My first painting was a landscape when I was 12 years old. I must admit — it was very good! There is a saying among artists that it takes 100 paintings to get a good one…this was my one good one for a long time… my paintings were a complete mess after that.

I was fortunate to have a good high school art teacher and I learned a lot from him — we explored various mediums and he would have students come in and play jazz piano while we drew them.

I spent my summers in canoeing in Canada (we had lived in Quebec for a couple of years when I was young) so I developed a deep love for the outdoors. While I was at camp in Algonquin Park, I learned about Tom Thomson — a Canadian painter who would take his trusty canoe out every summer and paint the Canadian wilderness. I didn’t realize it until later, but his work had a huge influence on me.

I finished my degree (many years later!) earning my BA in painting at California State University at Channel Islands.

Since then, I’ve run a non-profit gallery, became an Ojai Studio Artist and generally spend my days creating!

I picked up the palette knife a few years ago and now I rarely pick up a brush. I’ve even learned to utilize squeegees – and not for cleaning windows.