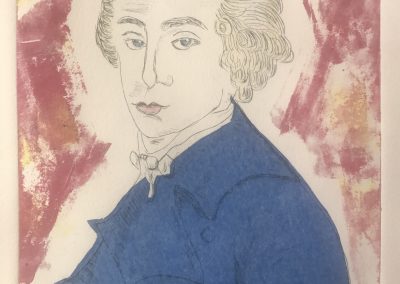 To find out more about this artist, go to www.LeslieFashionArt.com

I Love You Madly

Marie Antoinette is one of the most misunderstood people in history. The French had previously been at war with Austria which they tried to bridge by marrying Louis XVI to Marie Antoinette.

Marie Antoinette was criticized for her extravagant spending, particularly on her clothing. But in “Antoine’s Revolution,” we see that she was always setting the fashion. She put on men’s riding clothes to go out horseback riding. She went all out when she became queen with her beautiful gowns, but she became increasingly uncomfortable and reverted back to her days as a youth in Austria, wearing a more casual dress that was actually more in line with what the lower classes wore. It was thought to be “unqueenly” of her to wear this type of garment but it became the rage in fashion. The last garment she wore to the guillotine was actually a simple white chemise, less than the beautiful gown you would expect a queen to wear on her last day on Earth.

In “Chaumette Silk Stockings,” we see a fictional company selling the silk stockings worn by women in 18th century France.

In “Trendsetter, we see Marie Antoinette starting another new fashion trend, wearing an elaborate replica of a boat on her upswept hairdo. She wore this in honor of greeting the captain of the ship that battled to victory against the British on behalf of our American Revolution.

In “I Love You Madly,” we see her with Count Axel von Fersen, who is now known to have been her secret lover and the love of her life. They exchanged love letters in invisible ink, in a secret language and they went to elaborate means to secure their safe transit. In one letter to the queen, the Count wrote, ‘I Love You Madly,” these letters only having been discovered and translated in the last few years.